Having just returned from a family trip to North Carolina, I have a greater understanding of pottery in that region.  Seeped in history, clay artists are well respected crafts people, many finding a home amidst other potters and potteries in an area called Seagrove. Located midway between two central cities, Charlotte and Raleigh, Seagrove is a ceramic mecca where the North Carolina Pottery Center "promotes public awareness and appreciation of the history, heritage and ongoing tradition of pottery making in North Carolina".  Pictured right is a look at the inside of the center. 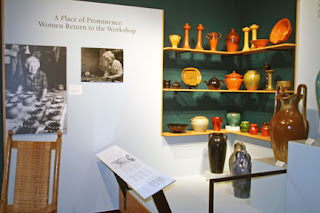 The center houses permanent exhibits of North Carolina pottery from pre-historic Native American through the 21st century.  An exhibit just ended that featured pottery from the Yadkin Valley Craft Guild.  Featuring potters such as  Nancy Goodwin and Richard Montgomery. In addition to exhibits, Seagrove offers workshops and demonstrations. Anyone can support the center by becoming a member.  Click here for more information.

North Carolina boasts great pottery and delicious southern food.  We sampled hush puppies and hot biscuits, two types of BBQ, fried pickles and pecan pie.  Since tomatoes are in season in the north, I'm sharing this delicious one for a southern tasting!  Enjoy!

By: Diana Swenson-Siegel on www.allrecipies.com
"You can also fry up red tomatoes with this recipe but make sure they are not over ripe or they will be mushy. Serve these tomatoes outside with a glass of iced tea one summer night and enjoy the sunset with someone you love."

Whisk eggs and milk together in a medium-size bowl. Scoop flour onto a plate. Mix cornmeal, bread crumbs and salt and pepper on another plate. Dip tomatoes into flour to coat. Then dip the tomatoes into milk and egg mixture. Dredge in breadcrumbs to completely coat.

In a large skillet, pour vegetable oil (enough so that there is 1/2 inch of oil in the pan) and heat over a medium heat. Place tomatoes into the frying pan in batches of 4 or 5, depending on the size of your skillet. Do not crowd the tomatoes, they should not touch each other. When the tomatoes are browned, flip and fry them on the other side. Drain them on paper towels.


I purchased a mug to bring home to remind me of my visit to North Carolina - lucky me!

Promote Your Page Too